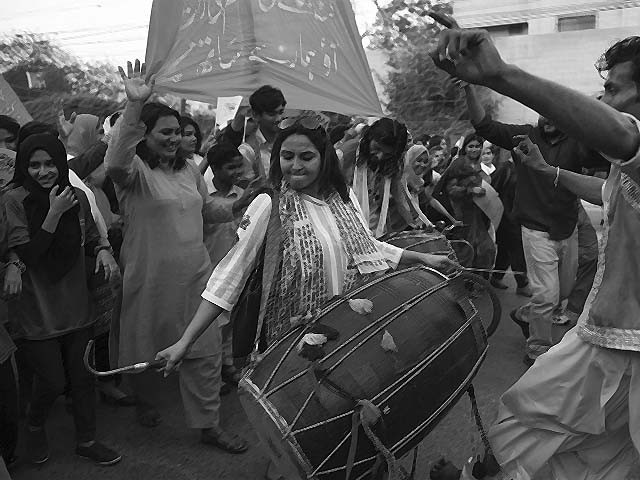 International women’s day and by extension, the Aurat March can trace its history to a parade held on March 3, 1913 when 5000 women marched from United State Capitol towards the Treasury Building in Washington DC to fight for the right to vote. The parade itself was spearheaded by Alice Paul under the banner of the National American Woman Suffrage Association. At the time, the behaviour of the men spectating the march  was extremely unruly who continually tripped and grabbed the protesters and jeered at them while they proceeded through the streets and the police did little to stop the overtly aggressive hecklers. Therefore, even after the passing of a 100 years, it is apparent that there is little change in the general demeanour of a majority of men towards such movements.

Interestingly,the date, March 8th, gained importance due to a movement  started by Russian women during World War I. While the men were off at war, women were dealing with severe food shortages and an inefficient government that simply would not cooperate. It resulted in thousands of women coming out to the streets on March 8, 1917, demanding change. This movement, which eventually led to the removal of the Tsar, became a beacon for women rights throughout the world. Eventually, the date was formalised as the International Women’s Day by the United Nations in 1975, and 1996 onwards, unique themes were adopted for the day every year, with this year’s theme being ‘each for equal‘.

“We can actively choose to challenge stereotypes, fight bias, broaden perceptions, improve situations, and celebrate women’s achievements.Collectively, each one of us can help create a gender equal world. Let’s all be #EachforEqual.”

The aim of International Women’s day is to help nations eliminate discrimination, grant economic, political, social and cultural equality as well as equal protection of law to women. It is also important to note that Pakistan is a signatory to a multi-lateral international treaty knows as the Convention on the Elimination of All Forms of Discrimination Against Women (CEDAW) which was adopted in 1979 by United Nations General Assembly, the focus of which is evident from its name.

Pakistan ratified the CEDAW in 1996, signifying its intent to accede to affirmative action as prescribed by the CEDAW, which requires states to take all necessary actions needed to encourage parity between women and men in all walks of life. One could argue that the CEDAW is a precursor to legislation like the protection against harassment of women at workplace act and the 18th amendment that promulgated the exclusion of the word ‘alone’ from Article 25 of the Constitution of Pakistan, which forbids discrimination on the basis of gender. Separate platforms such as the Federal Ombudsman Secretariat For Protection Against Harassment (FOSPAH) can also be considered the products of the aforementioned convention. However, the application of the laws and the performance of such platforms is certainly questionable and so, keeping the aforementioned legislation in mind, have we really achieved our aim of male and female parity?

This brings us to why the Aurat March is being held across the country in multiple cities. Women remain largely unsafe in this country, with 108 women being killed for honour in 2019 in Sindh alone. Women are subjected to all kinds of violence at all levels. Rape victims are unfortunately becoming younger, while fetuses are aborted for merely being female. Whether on the streets or in their homes, women are not safe from harassment and emotional or physical abuse.  Then there were the harrowing incidents in December where an 11-year-old girl was stoned to death and a female journalist was murdered for not quitting her job. Such incidents and reports still have not dissuaded social media trolls from directing threats and destructively inaccurate propaganda against the Aurat March and their organisers.

Lahore High Court was moved against the march by a petitioner who believed that the march had an agenda to “spread anarchy, vulgarity, blasphemy and hatred” against Islam. The petition was disposed of when the court observed that the Aurat March fell under the gambit of Pakistan’s Constitution. The court, however, did direct the organisers to ensure the participants comply with the standards of ‘decency and moral values’, without really specifying what the subjective terms meant and how they were to be applied.

A similar attempt to stifle the Aurat March was made through a petition in the Islamabad High Court on March 6, 2020, which was promptly dismissed by Chief Justice Athar Minallah. Justice Minallah said, that courts across the country are inundated with litigation brought by women against the denial of their inheritance rights and that International Women’s Day should be observed “as a day of introspection.”

More importantly, he also said that the slogans used during the Aurat March “…should not be given meanings according to the mindset of a certain section of society and that too, contrary to the explanation given by the proponents of the march.”

Lastly, he underlined his support for inclusive movements and said,

“Tribal patriarchal traditions and societal norms, based on egos and obscure insecurities […] have to be defeated through collective struggle so that no mother, sister or daughter suffers the agony of litigation to assert rights of inheritance nor innocent ‘Zainabs’ have to endure unthinkable pain and agony.”

A cursory overview of Articles 15, 16, 17 and 19 which gives right of movement, right of assembly, right of association and right of speech respectively, read with other rights guaranteed and protections given by the constitution guarantees that the march is legal and within constitutional norms. The purpose of the petitions in all probability was schemed to vex the organisers or to bring a bad name to the march with the aid of the judiciary. Thankfully, we saw that the judiciary is willing to protect the legal right of protesters so they can highlight the issues women are facing. This progressive move should be appreciated.

The manifesto presented by the organisers this year revolves around  “khud mukhtari” which means self-determination, a right recognised by and provided for by International Covenant of Civil and Political Rights (ICCPR) as well as International Covenant for Economic, Social and Cultural Rights (ICESCR). There is no better medium of self-determination than using the right to protest. So let us hope that not only does the Aurat March enable women to gain the right to self-determination but also helps in spreading awareness and protecting all those that may be suffering under the patriarchy, irrespective of gender.