A writ petition jointly filed by 7 families was heard by a division bench comprised of Justice Rooh ul Amin Khan and Justice Ishtiaq Ibrahim who decided to give nationality of Pakistan to the family on basis of their migration and residence on this land since time immemorial.

The lawyers argued that petitioners are residing in Pakistan since time immemorial, and their documented history proves their residence in Pakistan before independence.

They argued that since they are international businessmen, they have nationalities of different countries, however, those amongst them who reside in Peshawar, Pakistan have Pakistani national Identity Cards.

The argued that cause of action arose to them when their NICs were blocked, which were supposed to be expired in 2023, and they were not issued NICs any further.

The lawyers argued that they have documents of properties which proves their residence here before 1978 and even before independence. They said they are conducting business in Peshawar which helps the country not only through taxes but by providing for the public as well.

Justice Rooh ul Amin ordered to unblock their NIC and issue them with cards afresh after satisfaction of District Committee constituted to deal with nationality issues and those amognst them who have PORs should not be cancelled till they receive a NIC, and restrained the interior ministry from blocking NICs of those who already have them.

The court gave directions that the case be processed and decided as soon as possible and on issuance of NIC their PORs may be cancelled and the cards which are blocked shall be unblocked. 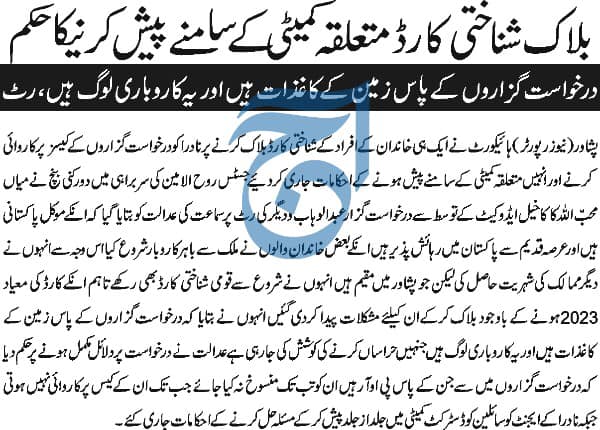