A bench of Peshawar High Court restrained local courts of Peshawar from taking any action against a senior citizen aged 80 through a stay order.

The lawyer argued that petitioner was working as a power consultant for Askari 6 Housing Society, and was not paid for his services.

He moved Civil Courts, Peshawar against Askari authorities for releasing of payment, however, they brought a counter claim against petitioner to harass him.

While the case was pending he moved to Islamabad from Peshawar and due to his old age and health complications could not attend court hearings. While the case remained pending, his lawyer died as well.

The court in this course or time passed an ex-parte degree against the petitioner.

The decree issued directed the petitioner to pay 5 crore and 30 lac PKR to Askari Authorities.

When he failed to pay, the court issued non-bailable warrants against him.

The court after hearing the arguments and record of the case, restrained the subordinate court to suspend the warrants and not take any action against the petitioner. 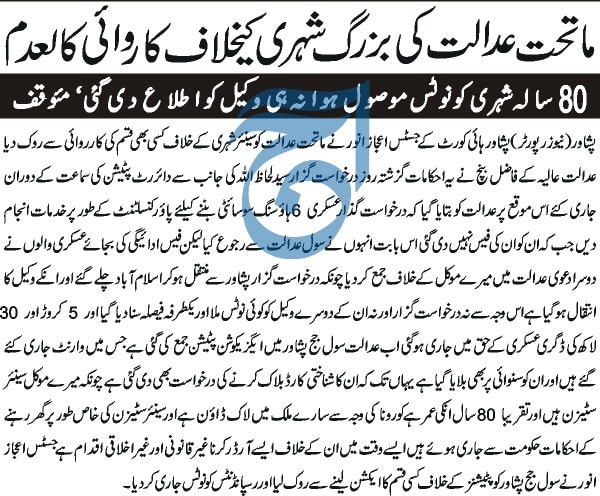